Bats Are Helicopters and Birds Are Jets - Or, Why Birds Can't Echolocate

I, as well you should be too, am fascinated with the idea of senses outside of the human norm.  Ultraviolet, Infrared, electro-magnetic, lateral line, blood hound like sniffers, pit viper pits, and the quintessential example--echolocation are boggling to consider.  What does it 'look' like to them?  Can they hear in 'color'?  Are those potential 'colors' the same as our colors just applied differently?  What would it be like to experience that breadth and depth of perception!?!?!?!!

(Aside thought: Take dolphins for example.  They can detect a quarter sized object 100 feet away.  Furthermore, they can like Superman see through material and see a fish under the sand or hiding amongst weeds.  They can even tell if another dolphin is pregnant.  Geewillakers!  Eegad!)
Ever have this thought, though?  If bat echolocation is so awesome (And it is awesome.  There are more species of bats than all other mammals combined) why aren't there birds that can echolocate?  (Okay, there are some that can a little, like the chimney swift)  It certainly isn't for lack of vocalizations!  And, it isn't that they don't have great hearing, either!!!  Why then aren't there super owls that mega-death the bats out there?  Why are birds so gosh-darn restricted to be denizens of the day?!?  Let me hit you with something: birds have been around at least 3-4 times longer than bats.  Why the heck can't they echolocate?!!!
So, I had a thought.
Have you ever seen a bat fly?  They kind of look like big moths/butterflies flying.  They flap, flutter almost haphazardly.  Birds seem to flap more when they slow down to land, but bats flap less.  If I may stereotype, birds cruise and bats float.  The difference just might have something to do with the way their different wings evolved.
You remember this from school, right?  Plane wings are shaped like bird wings--the top is convex and causes lift. Once the bird gains enough speed the wing takes over, in a sense, and its shape causes flight.
Bats don't have that luxury, though.  Or, is that such a bad thing?...

Bats, like pterosaurs, don't have this Bernoulli effect going on as much.  They just have a thin membrane stretched between feet and digits.  This isn't all bad, though.  While bullet like speed is sacrificed, what is lost is more than gained in dexterity and agility.  This membrane isn't simply flappy skin.  It has muscles and, particularly in the case of bats, has finger structures that can modify the shape of the wing to enable dazzling maneuverability juking, hovering, and stopping on a proverbial dime.
So, birds are jets and bats are helicopters.  Birds slice the air.  Bats caress and churn the air.  To oversimplify: birds wing shape lifts them, while bats flapping provides their lift. 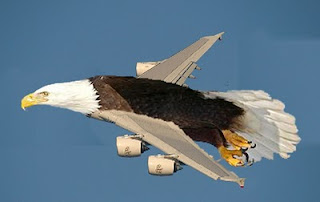 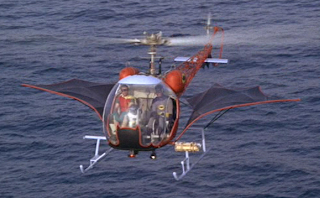 It just may be that birds can't hack flying in the dark because they just have to go too fast to be airborne.  Evolution is constrained to only work with what it's has or had.    If birds had wings with ruddering fingers and membranes then maybe they, too, could slowly go nocturnal and echolocative.  For now, though, bats rule the night!!! 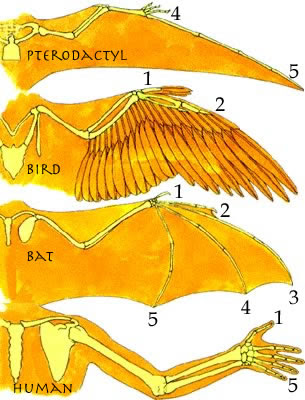