Are Humans Evolved for Polygamy or Monogamy?

Are humans naturally monogamous or polygamous?Well, what's science have to say about it?

First, a little background:  Gorillas mate in harems.  One male per 3-6 females.  Chimps on the other hand have more of a free love mating scheme. 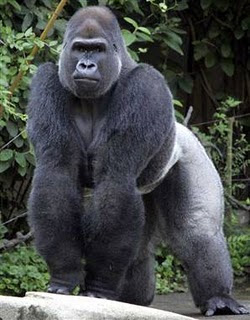 
Are there signs that our ancestors had many male partners?  Yes, but not we're paltry compared to some.  Here's how we can tell: let's say you're a female that has many men to choose from but you only sleep with a few.  In that case male displays become quite pronounced (think peacock tail).  On the other hand, what if a species not only has many males for the female to choose from, but she ends up sleep with many of them.  The competition between males is no longer how can I impress the girl, but how can I get my sperm to the egg more effectively or faster than the other males.

I've heard some discussion that the shape of the male glans is actually a scoop to remove other male's semen while thrusting.  So, that's one way, but a more common one among many species is a simple numbers game--overwhelm the competition with an army of sperm.  How would that change the morphology of an organism?

It would give it huge testicles.

In short, if there are many males sleeping with one female the one with the largest testicles has the best chance of winning.

So, how do human testicles compare to other species? 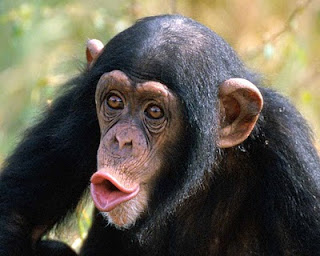 Summary: we're semi-promiscuous.  Our females fidelity is some where in between gorillas and chimps (but more toward the gorillas side).

There's more to the equation, though!


(Another interesting solution to this problem is to made a vaginal plug out of your semen: http://en.wikipedia.org/wiki/Mating_plug)

There's an evolutionary reason for that!

This is exemplified by the gorilla.  We've already said they have small testicles, so that isn't how the males have reproductive success.  What is it?  They get so big and muscular that they can kick all the other male's asses.  Gorilla males have a very, very, very well guarded harem of females.

They don't need big nuts when they've got big guns.

So, the more sexually dimorphic (skewed male/female size ratio) the more polygynous the species.  How do humans stack up?

Summary: we're more polygynous than chimps, but less than gorillas.

Much more could be said here, but that's something to chew on.  (Aside--high IQ has been correlated with increase monogamy in humans)

It seems conceivable that since human females put so much effort into displaying to males (makeup, cosmetic surgery, clothing, etc.) that males are often the choosers in our species.  Why be choosy? Only because you have something to lose from picking a genetically inferior female - time, effort, resources.  If there was nothing to lose then you'd have no standards.  Being choosy just may indicate that we are a particularly monogamous and caring kind of male species...On the other hand, maybe human females aren't trying to win a male so much as they are trying to keep one.

(Later addition below)
If it's such a "man's world", as some say it is, then why is polygamy out lawed in most countries?  At first blush that doesn't make any sense!  If men rule the world then you'd totally expect polygamy to be in vogue!   Is it that women prevent it to avoid exploitation?   Well, unlikely.  Think about it.  Polygamy is in the best interest of women evolutionarily.  From an evolutionary perspective what do when want out of a man?  Resources to care for a child and superior genes.  In a stratified society (which can lead into polygamy) woman can get both more resources and better genes from being with a highly successful money-bags.  Also, in a polygynous society all the women get a mate (in theory) since even the lower quality ones will be taken since a low quality woman is better than no woman.  Men on the other hand (on average) end up worse off.  One reason being what I just mentioned--in a polygynous society not all of the men get a woman.  In fact, it's interesting to note that monogamy may very well be one of the first steps towards democracy.  The average man started to collectively say that they were no longer going to let a few successful men take all the women from them.  So, contrary to some popular opinions monogamy wasn't a defense of women's rights, but of instead of men's.  I find that fascinating.
Posted by Unknown at 9:26 PM