Ever since I took Greek classes in seminary I have been fully aware of how awesome learning the roots of words can be.  Many on the outside don't realize the grueling, laborious, fastidious dedication that many Biblical translators have, nor do they realize that scores of people have made livelihoods off of being the experts needed to translate the various morphemes of the Bible they see in their local bookstore.  Each word of the New Testament has been historically tracked, traced and gone over with a fine tooth comb to see the various contexts it has been used in both in the scriptures as well as other ancient manuscripts.  I personally own a set of software valued at somewhere around or over 1000 dollars that contains copious grammars and dictionarys cross-referencing every location each word is used in the Bible and potentially every time it was used in the surviving manuscripts of that day (I can't bring myself to sell it even though I've sold copious amounts of my other theology book).  It's really quite fascinating (and not a little bit overwhelming).  You couldn't learn all there is to know in several life times.

Why did I just say all that?  Legitimate question.  To break the ice of discussing a very interesting root word.
Religion.
Origin: 1150–1200; ME religioun (< OF religion) < L religiōn- (s. of religiō) conscientiousness, piety, equiv. to relig(āre) to tie, fasten (re- re- +ligāre to bind, tie; cf. ligament) + -iōn- -ion; cf. rely
religion

c.1200, "state of life bound by monastic vows," also "conduct indicating a belief in a divine power," from Anglo-Fr. religiun (11c.), from O.Fr. religion "religious community," from L. religionem (nom.religio) "respect for what is sacred, reverence for the gods," in L.L. "monastic life" (5c.); according to Cicero, derived from relegare "go through again, read again," from re- "again" + legere "read" (seelecture). However, popular etymology among the later ancients (and many modern writers) connects it with religare "to bind fast" (see rely), via notion of "place an obligation on," or "bond between humans and gods." Another possible origin is religiens "careful," opposite of negligens. Meaning "particular system of faith" is recorded from c.1300.  Modern sense of "recognition of, obedience to, and worship of a higher, unseen power" is from 1530s. Religious is first recorded early 13c. Transferred sense of "scrupulous, exact" is recorded from 1590s.
(copied from dictionary.com)
Religion, quite possibly, comes from a root word meaning 'to bind' (and interestingly enough, so does 'rely'!  How cools that?!)
What irony! 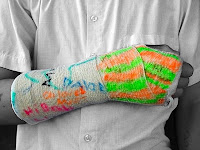 Religion 'binds' us together, heals us
Isn't it fascinating the way that can be taken more than one way!!!?  On one hand, you could say that religion is the thing that 'binds' society together.  It's the social glue that keeps us from coming undone into shear chaos and rules of the jungle anarchy.  It keeps us sane.  It's like the cast, sling or wrap that keeps an injury from becoming worse.  It very well may come from the same word that 'ligament' comes from--the means that keeps our bones and joints in place and working properly. 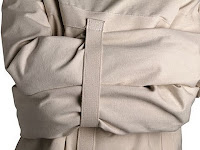 Religion 'binds' us, trapping us
If there has ever been a flagrantly anti-intellectual movement it is religion.  What other system of thought has systematically denied and suppressed information and whole fields of study, e.g. evolution, embryonic stem cell research, heliocentrism, etc.  I don't need to list out the historical wars that it has perennially caused.  A paraphrase of something Stephen Weinberg said--good people do good things and bad people bad things, but it takes religion to make a good person do bad things.  Religion silences the questions, inventions, innovations, explorations and intrepid scientific spirit that has made our species so great and instead substitutes a pale, weak, impotent myth for the glorious reality of possibilities.  "Don't ask questions, just believe, just do as we say."
In the end, both are true.
But what makes the difference?
Why is it sometimes salubrious and others pernicious?
Posted by Unknown at 9:53 PM